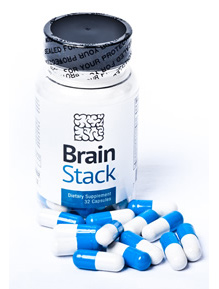 One of the brain enhancers that we’ve recently managed to get our hands on is Maven Labs’ Brain Stack. It’s a nootropic supplement that has recently popped up on our radar, and in fact, when we searched “nootropic” on Topbrainenhancements.com, it was one of the first products to pop up. Maven Labs, unfortunately, hasn’t had a lot of success with their sales lately. Despite their really attractive website, they make the majority of their sales through Amazon.

If you would like a short read regarding their ingredients though, we suggest you head over to Maven Labs’ website. Their site is packed with some short descriptions and vital information to get you started, or if you would just like to learn more about the ingredients in BrainStack. There is also a lot of links to other resources in case you’d like to take the research further on your own.

BrainStack struck us as a company that seems to know what they’re doing, but isn’t doing that well in the market. With the rising popularity of other brain supplements, it just seems like they aren’t able to keep up. They tried following the trends, especially with the release of a new formula some time ago that brought increased potency to BrainStack.

However, even then, as a product, this is one case where potency isn’t simply enough. BrainStack suffers from a formula that simply isn’t good enough, despite them taking a few notes from the best brain enhancers in the business… and on top of that, they also increased the price (yikes!).

“This is no bogus magic pill, this is the real deal.”

“BrainStack has science to back it up.”

If you’d like to see BrainStack’s supplement list, all you need to do is do a Google Images search for it. While the supplement facts is seen on the back of a picture of a bottle on their website, it’s a shame that the words are too small to even be seen.

While we have found quite some good ingredients in BrainStack’s formula, we found that it was really lacking in some areas. While they did follow on some of the best qualities of brain enhancers, potency, with their use of only 12 ingredients, BrainStack falls short due to the exclusion of some key ingredients.

Probably the only ingredient that we actually like in BrainStack’s formula is Acetyl L-Carnitine. As an acetylated version of Carnitine, ALCAR offers more mental benefits than physical due to its ability to cross the brain-blood barrier. It primarily affects an increased production of the neurotransmitter acetylcholine, which is responsible for memory, learning, problem-solving, analysis, and cognition.

We would love to have seen Phosphatidylserine, Ginkgo, or even Ginseng in the formula – three key ingredients that we believe have a drastic effect on a formula’s overall effectiveness. These three ingredients are also great as vasodilators, and have a very positive effect on neurotransmitter production in the brain.

We also would have liked to have had GPC Choline changed for the more potent Citicholine, and Guarana might have been a better energy source. It’s more potent, as well as being all-natural.

Instead, BrainStack has included other non-essential ingredients. All in all, it seems the formula list is a little bit lackluster, and the recent reformulation they had was a perfect time to make some positive spins, but instead, BrainStack falls flat.

BrainStack might have benefited instead from only using more ingredients. By cutting ingredients with copying what others do, and increasing potency, they’ve managed to cut some of the good ones out.

Our tests with BrainStack lasted for a whole 45 days. We had a few volunteers come in to our lab (aged 19-40) who agreed to take BrainStack continuously and write down their findings in a journal. They also had to come report back with our lab every two weeks for general cognitive performance tests.

We were surprised that quite a lot of our participants came forward, claiming that BrainStack was actually great, positively affecting their brain in terms of focus and concentration. However, a few days later, we found out that this was the effects of caffeine, with reports that the effects gradually wore off.

Still, for a few days, BrainStack succeeds at impressing with its positive benefits to focus and concentration, and more importantly, in what can be done with increases to these. Our volunteers loved the increased motivation, and reported getting a lot done in little time, whether that be getting a presentation done, writing a report, or maybe even doing some household chores.

Frankly, this was still rather disappointing as its website builds up much expectation on its effects. There were no effects on memory or mood.

In our performance tests, it was shown that BrainStack doesn’t really do much for the brain at all. After a series of cognitive tests, we measured that any differences were slight and almost undiscernible.

While many of the opinions online about BrainStack were generally positive, it got so much hate due to the fact that they increased their prices, giving them substandard scores. There was also a lot of negative feedback on BrainStack’s caffeine and side effects from that.

This does work but the price and the caffeine have turned me away from it. I cannot justify spending $70 or more a month on this. It did give me energy and made my thinking clearer. I just do not like to take caffeine in any form and I am on a budget.

I prefer to get my energy from other sources because of the side effects from caffeine. I did not read the ingredients carefully or I would not have bought it if I had realized it had caffeine. Now I am scrutinizing everything I buy.

I recently purchased some sulbutiamine Sulbutiamine Nootropic Capsules (200 mg) 100 Capsules here on Amazon. It costs less(I don’t need to take as much so it really is a money saver). The big thing for me is the no caffeine it is 100% natural. It works great and I have experienced no side effects. If you want a natural cognitive enhancer try sulbutiamine.

I have been purchasing BrainStack for a while now and now I’m pissed off because they raised the price to $50 a bottle! $35 seemed kind of steep considering its only good enough for a couple weeks for me. Ive been a happy customer for a while but this just burns me – I would recommend looking up absorb health Sulbutiamine 500mg capsules. They are caffeine free but you get a lot more and this combined with some caffeine works just as good if not better than BrainStack for me.

Some of our volunteers noted on jitters and anxiety while they were on BrainStack, which can be very easily attributed to the amount of caffeine in its formula. Fortunately though, most of these reports were nothing major and the side effects were very subtle possibly due to the inclusion of L-Theanine in adequate amounts as well.

A bottle of BrainStack runs for $34.95 and should last for fifteen days under the suggested two capsules a day recommended serving. There is also a one month supply option that runs for $65 and you get two fifteen-day bottles. Recently, so many of their customers are complaining about the price increase for BrainStack, and it has been getting a lot of negative reviews as a result.

One might justify that the price increase is justified by the new formula, but it really isn’t. The effects are substandard and the value for that price is pretty low. If you really want to try BrainStack, we suggest you go with the 2-week supply option first.

Pro’s:
– Good focus and energy pill
– Only minimal side effects

Con’s:
– Doesn’t really do anything for memory
– Formula could be a lot better
– Price increase leaves many dissatisfied customers
– Poor value for the price
– Effects wear off eventually

For something so well-ranking on Amazon, BrainStack is a really good example of when a pill manufacturer copies another well-established company without doing the required research first. Though they have some good points, they have some really miserable ones too. It almost really seemed like BrainStack is just a glorified caffeine pill. Our volunteers were able to achieve great things under BrainStack, but the effects didn’t really last all too long, and it lost effectiveness over a couple of weeks.

We really would have loved a few different ingredients in BrainStack – phosphatidylserine, ginkgo, and ginseng… but instead, we have a seemingly more potent formula that barely does anything.

BrainStack builds so much expectation in its website and in the fact that it is a ‘revamped’ formula, but is a lousy attempt at a brain enhancer, that only made things even worse for itself by demanding a higher price than before.